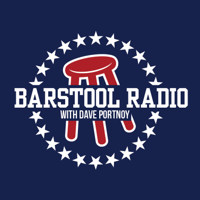 Barstool Radio with Dave Portnoy is a weekly "best of" podcast where we deliver to you the best 60-90 min from Barstool's daily show on Sirius XM. This podcast focuses on the inner workings of Barstool Sports while also hitting on many of the viral t...Show More