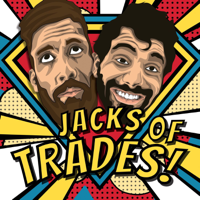 Want an in-depth analysis discussion of arcs, trades, and one offs? Enjoy finding out which beer best pairs with an evil villain? Are puns the greatest thing you've ever heard? Join Mike and Davis as they delight and destroy your favorite illustrated...Show More

Best episodes of Jacks Of Trades