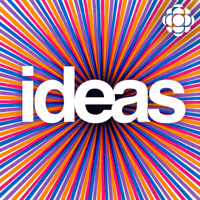 IDEAS is a deep-dive into contemporary thought and intellectual history. No topic is off-limits. In the age of clickbait and superficial headlines, it's for people who like to think.