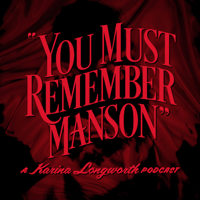 You Must Remember Manson

From the archives of You Must Remember This, Karina Longworth presents her hugely popular series, “Charles Manson’s Hollywood.” It chronicles the murders committed by followers of Charlie Manson in the summer of 1969, and how the lurid crime and its ...Show More

Best Episodes of You Must Remember Manson