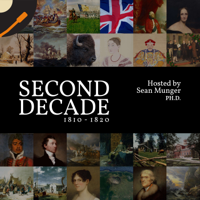 This is a historical show examining the momentous events and interesting people of the second decade of the 19th century, the 1810s. From Jefferson to Napoleon, from Iceland to Antarctica, historian Sean Munger will give you a tour of the decade's mo...Show More