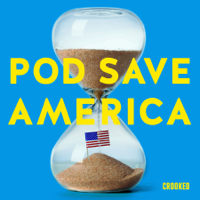 Four former aides to President Obama—Jon Favreau, Jon Lovett, Dan Pfeiffer and Tommy Vietor—are joined by journalists, politicians, activists, and more for a no-b******t conversation about politics. They cut through the noise to break down the week’s...Show More

The 8 Best Episodes of Pod Save America